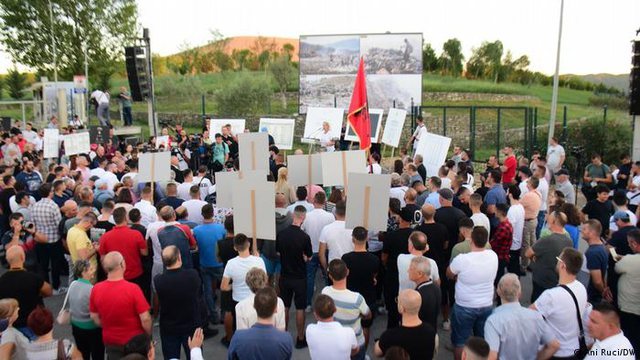 Agushi protesters waiting for the orchestra

TIRANA / SHARRE / CEPAN - It was a brilliant solution by an expert who knows psychology and human behavior well, that of Agush Metushi yesterday.

As is already known worldwide, Agushi called all of Albania to gather and protest near the largest pile of garbage in the country. And close to heart that people can't wait to gather their heads on the trash and shout as loud as they can: We were suffocated by trash!

As Patronajisti learns, protesters from all areas of the country had been notified a week before that they would gather at the garbage to protest. They had gotten ready, washed, perfumed and dressed in their best clothes, telling each other anxiously: Don't forget, meeting at the trash!

But maybe this was the big misunderstanding. Because on the afternoon of the protest, ex-leavers, ex-directors, ex-customs officers, ex-taxmen, etc., etc., from Korça, in Elbasan, from Gjirokastra to Lezhë, from Kukësi to Vlora, each went down to the garbage bins of their own neighborhood, waiting for the grand event to begin.

Within minutes, excitement turned to worry, worry to anxiety, when a group message on uacap made the mistake clear. It was the ex-journalist-turned-politician named teddy bear, who urgently announced:

"We have informed you that we will all gather at Tirana's garbage, not everyone at their own garbage. The slogan was 'Garbage of all colours, unite', not disperse! Therefore, head quickly to Sharre near Tirana, as you come from Kombinati, turn left. Mrs. Marie-Antuaneta Testagrande herself will come out to meet you there!"

But it was too late. What's worse, Berat protesters got confused as soon as they read the word Kombinat. They first gathered at the former textile factory in their city, and started singing the revolutionary march "O Berat, çe pate fat" . But the song on their lips was cut off when they were told that they had to gather at the Tirana Combine.

However, despite the confusion, they all gathered in Sharre. In addition to the reeds of the area who sold artificial flowers and begged for money, there were the babysitters of Agush Metushi's family, past and present; cooks, hairdressers, gardeners and bodyguards; Professor Mondi of the DP had also arrived, at the feet of Baba Mondi who could not be exposed politically; while the community of spineless slugs was represented by MP Sali Anji.

"I came," said Sali to Anji Agushi, holding a perfumed handkerchief to his nose, "so that no one has a mouth to say that Sali was absent from your protest!"

The protest went for beauty. The atmosphere lit up even more when the orchestra arrived. Three young men who saw the gathering and remembered that it was Nowruz, grabbed the tools and began to play them, walking among the people shouting: " Bani sevap, god kalamayt protects you!"

But lovers are never absent. Even this time, there were those who declared that Agush Metushi could not even gather the leadership of the party and the drivers, let alone gather all the people of March 2. But Agushi cut short these insinuations.

"I'm sorry, I'm sorry, I'm sorry, I'm sorry for a second, " Agua said in a statement to the media, whose name someone confused and called Jagua. " First of all, it is logical that the people of March 2 cannot gather on September 13, otherwise it was understood. Second, an unprecedented crowd gathered in Sharra's garbage. Because the garbage pile is so big, almost 1000 meters above sea level, that it reminds me of Çepan. Third and most importantly, let's check out the visuals. I demand VAR control!"

And Agushi started showing the slow-motion video of the protest, where the camera was focused on 100 people filling the screen full of people.

"Look, you see? Tumbllaz with people", said Agushi, " keep it there. Yeah, don't take the camera away, the rest doesn't matter, sorry sorry sorry one second"…