THE LOGICAL SOLUTION / Çucja explains why he fired the honest policeman: It was the stamp, all the others were corrupt! 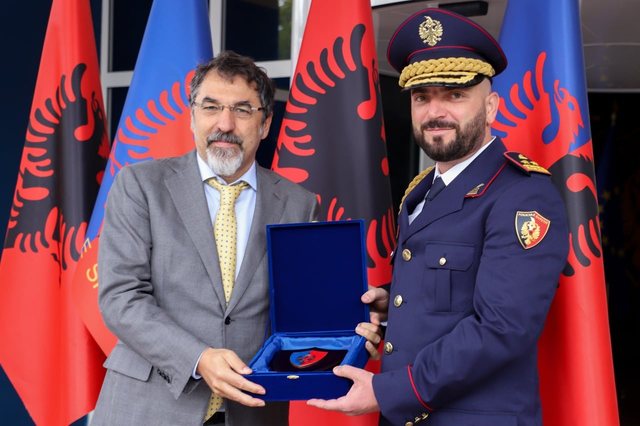 TIRANA - Headless police officers, officers who step out of line, who do not act in harmony with their colleagues, who hate and ignore teamwork... All these vices the Minister of the Interior had made clear to the police chiefs since he took over the directorate: Who shows signs like the above he must resign immediately or I will.

However, it seems that the orders of Minister Chucja were not followed by the former police director. Perhaps Gladys thought that the surname Nano would somehow help the socialist government show some respect for him and his work. But it didn't happen like that.

It turned out that he had all the vices: He even got out of line, he didn't do the group work, while the harmony with the other bosses was not just missing, but 100% out of tune.

And the fact is that Chucja does not tolerate intonations. He called Nano to the office to hold him accountable, but the police director again stepped out of line. He said: "Mr. Minister, I have information that all the police chiefs are on the border of criminals." Action must be taken immediately."

Chucha what is the truth was alarmed. And he acted immediately. In the presence of Gladys, he called the director of finance at the Ministry and asked him rudely:

"Tell me here now in vivavoce, what crimes and atrocities have you committed, maskara! We left all the police chiefs on your border and we didn't know it! We did not keep the snake in the bosom! Wow, what did you find me, "and he was tearing up the pages on the phone.

The chief financier, surprisingly, did not disturb Teresa, because he had taken these scenes:

"I have bo violence? For God's sake, no, for what to do Mr. Minister, you know me well. I'm not a workaholic, a workaholic, I don't even raise my head when I walk down the street. They lied to you, sir! Don't hug me because you'll leave me in the streets of Vienna and Paris!"

Chucja put down the phone, raised his shoulders and said to the chief policeman:

"See? Our pay slips are clean. Check the information carefully, because you don't understand the powers and duties very well, take care!"

The meeting continued a little longer. The desolate Gladis tried to explain to Chuche that she was not talking about the state salary slip, but about other notebooks and figures, against which the bosses completely forgot that they even had a salary to receive. In the end, he gave his word that he would talk to the big boss, Ed of Tirana, Durrës and all of Albania, and they would meet again.

He also found Bella in Ed's office. He told them all, over and over.

"The Director of Police told me that the entire high hierarchy receives money from organized crime," Çu?ja confessed, "and urgent measures must be taken." The Americans know it too, he said.

"You're lying," she said flatly, " first of all, crime is completely disorganized, don't you know that they're killing each other? Do not believe him, he is arrogant. We also spoke English!"

Eddie thought about it:

"What is the truth... I have heard these accusations again and again. But from the verifications made, it turned out that they don't even touch the money. They only take euros. And some dollar and sterling tak-tuk. So, I mean, incorrect data leads to incorrect conclusions, right guys?”

"Correct! You cried! How beautifully you speak, great lord! You are great boss. Let's fire that bigot. We cannot keep it and remove all others. He hates teamwork and this is the first criterion of a successful policeman. We need a chief of police who knows how to round the numbers".

Chuche's second meeting with Gladys was very brief. As soon as the police director entered the office, ?ucja didn't even let him sit down:

"You have not achieved any objective! You're fired! You lack harmony with your colleagues! You threw mud on our clean borders! You refuse to round the numbers! You, like a lying criminal, chased the desolate Sulo and he, to save himself, jumped from the wall and fell on his head...".

But the dismissed subordinate interrupted him: "You messed up the film, Mr. Çuçe." He is reciting Poppies on the Wall. You know that I'm leaving...".