MEDIA / Fania begs Ed: Burn my newsroom if you wanted, but don't destroy my swimming pools! 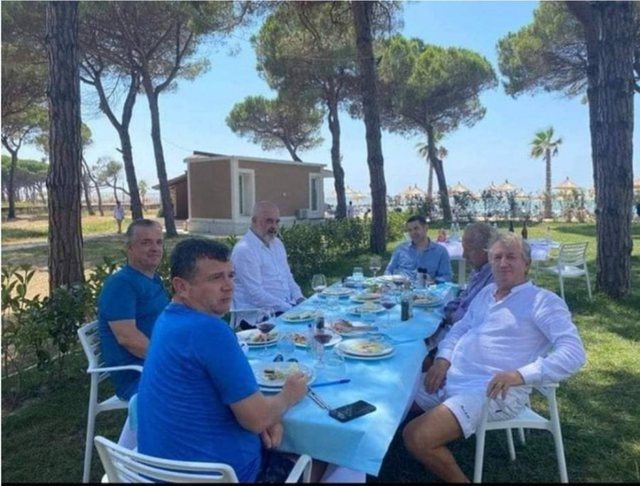 TIRANA / GOLEM / SURREL - As can be guessed, the demolition of the Fanes swimming pools has eclipsed this week the news from the war in Ukraine, the energy crisis around the world, the lack of wheat in Africa, or even from the big clash between Biden and Trump in America.

In terms of human reflexes, Fania is not at fault. He had so many years without paying taxes, taxes, rent, arrears, etc., that he had completely lost the reflex of payment. Or more precisely, he paid in kind, with lunches and dinners, rooms for sleeping, massages and hydromassages. So when the news came to him that the hotel pools would be drilled and the water would be taken to where it belonged, in the sea, he asked to communicate directly with Ed.

"Mr. Prime Minister, I am the founder of the largest media group in the country," he said, "I have a very big problem."

"How is the work?", Edi asked him, "Are the journalists obstructing or harassing you? They don't let you report from the scene? Have the police behaved harshly with reporters? Or do the state institutions not give you information?"

Fania was silent for a moment. “No, no,” he said, “I'm getting hit by breweries, construction, even hotel pools in Golem. Do you remember where we ate last year?"

This first communication left a very bitter taste for Fane. After gathering herself and consulting with a few trusted people, she reconnected with Ed.

"Look Mr. Prime Minister, I thought about this matter. I am ready to make a sacrifice. How about having some people from SHIK beat me up some night under the palace? You've tried it yourself, it's no small thing. Just don't take the beer taxes away from me!”

"It can't be done. I don't have people," replied Edi, "those who beat have grown old, while now the Service has only some scumbags who hang out all day on Facebook. I can't help you".

Fania didn't give up:

"Is good. How about I set fire to the newspaper office? There is nothing, but I put out the fire with two bottles of beer that I have nearby. Just don't spoil the pools for me!"

Eddy: "No more." Put journalists out of work and hire hotel waitresses. It can't be done!"

Fania: "Yes, and now I have them as waiters. What's up with you, they don't lose their craft, because I'll make them do the Beach Newspaper after the shift!"

It is not known why Eddie did not like Fane's tempting proposals. But the pools were broken. Patronageist learns that journalists are the happiest from this story. Not that they saved newsrooms and TV studios from burning, but because they have guaranteed news for a couple of months, without getting too tired. They will report on sad tourists.

Note: Patronageist is a satirical column without pools