BREAKING NEWS/ Berisha is shot with a punch

Iran: We have destroyed several Mujahideen terrorist cells, they were run from their base in Albania

The Prime Minister of Luxembourg sat down on his knees, what does Rama's gesture mean?

"Europe, throw us a life jacket", begins the protest of the opposition 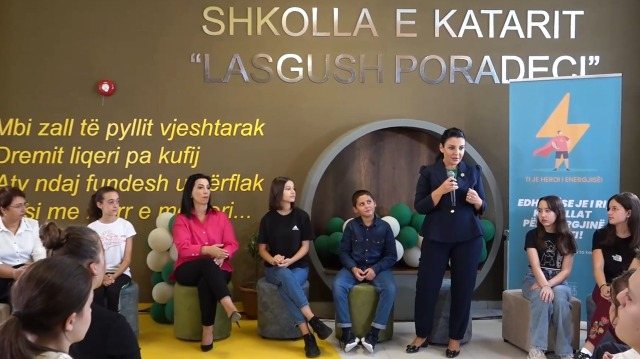 As you learned in the new primer, Russia's treacherous attack against Ukraine has caused, among other things, a global energy crisis, from which Albania could not be an exception. Because it is known that the exchange of fire, the shooting of cannons and tanks, the strikes of rockets and the flights of Bajraktar drones, cause droughts in the air of the Balkans, and consequently, a decrease in rainfall. This leads to a decrease in the level of rains and a reduction of water in the Lakes of the Cascade of Drini.

In order not to prolong it, dear children, the burden of overcoming this energy crisis in Albania has fallen on you. Even if you try a little harder, you can help the Balkans and Europe. I could have solved it myself, but for strategic reasons I had to sell a lot of our hydropower for a piece of bread, and buy as much energy as a chicken from abroad. You certainly know the chicken, God forbid you bring it to deal with the turkey! Upupupu how evil they are.

I make this call to you, this appeal, as we adults say, because you hide within yourself a secret power that you don't even know you have. I tried it myself when I was little and when I was rehearsing with a thin, spoiled and playful voice, to ask for things that were not given to me. As soon as I lowered my voice and frowned in my almost crying face, all the doors opened for me. If you noticed, I do the same now.

So what can you do to save energy? I will explain below.

First, tell Lali Eri to turn off the street lights, se la nam. I don't understand how a mayor can be so generous. A public official should be the symbol of thrift. For example, when I was at Albkontrolli, I could barely buy a 150,000 euro Persian carpet for the office; I barely spent 40 thousand euros for two months of fuel, I collected the crumbs to train two employees with 60 thousand euros in Europe, for the same courses that other countries paid a full 6 thousand euros; Think about it, I signed tenders even in August, because I was busy with work.

This is the main one; to eat your hands. Lali says that he sold figs, but I got a frog in Athens. I studied so much in Greek homes that Oktapodhasi took me with him to Tirana. Come on, Bella said, we will buy AMC and fill the Albanians with cell phones, they will talk to each other. I'll come, what's wrong with him, I said, and I'll make them talk to themselves.

So, you will help me to make parents and grandparents talk to themselves. That's how they save. First, unplug the chargers. Did dad's cell phone get two lines? Unplug it, because there is nothing you love more. Maximus, being the pushover that he is, will secretly take messages to his neighbor on the third floor. Mom's cell phone didn't fully charge? Big deal. Chances are, she'll spend the entire offer making out with Eftiqia, and complaining about her dad having his eyes on the third floor.

Other heroic acts you can do: Turn off the washing machine and tell mom to hand wash the clothes in cold water. Mind you, always in a thin, raspy, half-playful voice, like I used to do with Ed at City Hall when he called me a witch. Oh, what times. The witch tells me even now. It's great Eddie! We were once going to Corinth...

Sorry for reminiscing. Next, ask mom to iron your clothes with a cold iron. Trust me, a cold iron uses much less electricity than a warm iron. The hot one then tears you apart.

Another saving method is to not run the lukewarm water when you take a shower, but to wash the dishes with it. After washing the dishes, do not pour this water either, but wash the square. And after washing the square, use the excess water to wash the car. But even after washing the car, there is no need to turn it on. As I have said other times, to buy bread go on foot. Tell the parents that even to buy tampons and condoms, they have to walk because they can't find anything. It's physical culture and they lose weight. Don't look at me. I really want to walk but I'm too busy; you have no idea what it means to sell and buy electricity; to make road tenders; to sign concessions, to grant licenses for solar and sky panels;

And now we come to the most important thing: What to do when grandparents fall asleep in front of the TV with the remote control in hand?

The easiest thing is to turn off the TV. But you can do more. The point is, remove the batteries from the remote control. Even when he woke up, he couldn't turn on the TV. If grandpa insists on turning on the TV, tell him fine, I'll turn it on, and offer him a glass of water with a valium tablet in it. Without realizing it, grandfather will sleep again.

But if that malukat still doesn't sleep, scream and ask to go to the bathroom because it's saving you. Remember well, Chichi, not Chuchi. When Grandpa accompanies you to the bathroom, quickly go outside and lock yourself inside. There is no electricity to waste in the bathroom. At most, he can turn on the hair dryer, which, for the sake of truth, doesn't work at all.

Now, there may be extreme cases when the grandfather insists on consuming electricity. Here's what you will do: Write a letter where you accuse him of tricking the party, that in 1960 he wanted to overthrow the first secretary from power with the help of the Soviets; that he is the author of the black Chinese theses of the sliding theory, avoiding frontal combat with the enemy. Thus, the party will accuse him as an enemy and the grandfather will continue to waste electricity.

This scheme that I just described to you with the imaginary grandfather, is just a suggestion, that I do not know that it happened in reality. But I know you can become the energy heroes. To save as much as possible, to fight, to live and work as if under siege. I will try to break the siege from time to time, because I will have some work in Vienna, Brussels, Athens, Paris, Porto Cervo, Mykonos, etc., but don't worry. As long as I sell and buy some electricity, I will come back.

PS Dear children, keep in mind what we said about grandfather, also applies to grandmother. Strength, we will make it!

Note: Patronage is a satirical column with short hair, no bangs