THE HERO'S DESPERATION / Ed vents in the middle of the UN: Hey, I'll sort it all out, will you do any work? 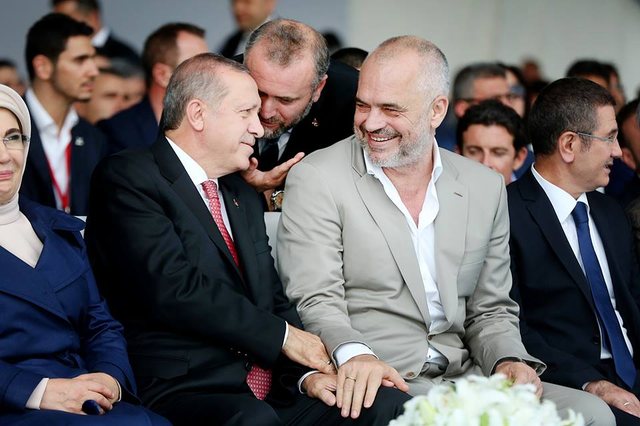 NOVA YORK - It was a tiring week. He hardly had time to eat a loaf of bread because he was ambushed at every corner of the UN corridors. This is where Joe Biden pulled him by the sleeve, there Macroni sent him text messages, while Sholci, like the démodé that he was, his aunt asked him to meet by fax. They asked him for an opinion on the price of wheat, the excise duty on oil, new supplies of weapons to Ukraine, and all sorts of other crises. Even the German took him aside for a couple of minutes and scolded him: "That party of nurses you sent last time shot very well, brother. Do you send us two more orders like that? You wanted to hide inside the bananas."

The climax was when the head of the UN, Andon Guterres, begged Xha?ka to give him a meeting with Ed. After much trouble, they met. As soon as they were together, he said bluntly:

"Mr. Eddy, I can't do it alone! For God's sake, stay for a few days and give me a hand in the affairs of the world, because you put Albania and the Balkans in the bargain for half an hour".

With a tiredness that could be read on his face, in his facial expressions, in his posture, in his body language, Edi let out a desperate breath:

"Well done Andon! How long will we continue like this? Are you going to tell those others to do some work, or are they going to make fun of the bitha? I mean, when I'm no longer me, this world will go to hell, right?"

Andoni answered in a meek voice: " Don't remind me. " I don't even want to think about it!"

The global leader with a coincidental birthplace in Tirana, Albania, took the road back with his head boiling with thoughts. Lad Putini was not convinced to surrender and accept defeat. Edi had proposed to him through secret channels that if he gave up power and opened the way for democracy in Russia, he would give him a two-story villa in Dhërmi, and Ladi as Ladi. Rock head.

Then there was the matter of the elections in Bosnia. He told Macron and Sholc in New York: " Take care of Bosnia, don't talk about it. " I'm breaking into a hundred pieces and you don't even put water on fire!" But he didn't trust the spots.

A hundred jobs were still waiting for him in Europe. In Greece, Miçotaqi asked them to sit down for a coffee, but Edi didn't let him: " I'm sending Taulanti to come to an agreement. I don't have time" . He sent either Spirodhalla or Balluken to the other prime ministers.

Then there was the problem of Albania. One of the ministers, the interior Chucja, had sent him a video message: "Old man, you can't believe it: They built a palace completely outside the project right in the middle of Myslim Shyr! Terrible old man, what an idiotic country we live in!"

He didn't have a hundred hands. And his day was 24 hours, like everyone else's. He decided to collect his mind and select which crises he had to solve, otherwise he would go crazy.

He decided to deal with the Council of Europe and Dick Marti's report on Kosovo. "It's good that I remembered," he said to himself, "that I promised Hashim the desert." And he, the tar with ink: With his own hands he approved the court that would imprison him himself. Hashimi has been a masochist since he was little...".

He went to the Parliamentary Assembly of Europe and named those Qurras people. What was not said.

How dare you, how can you approve a report full of tricks, the son of the world has fallen into prison and fought for his country... then there are the unmarried boys.

The deputies of the Assembly did not know where to go because of the shame. Even for a moment, Ed felt like taking out shoe no. 45 and slamming it on the table, but at the last moment he remembered that comrade Khrushov had done this too. No matter what, he decided to use the old joke: I am 1.98 tall, but I come from a small country, tormented by history, but we are proud, stubborn.

Ed's speech resonated very loudly. The leading newspapers of Bangladesh and Nepal were filled with his pictures. But as he was getting ready to return to the Albanian hut to collect the bones, his phone rang. When he saw the number, Eddie turned pale.

It was Baba Rexhepi. He asked him to come to Istanbul urgently.

"Okay son. Come on, sit down. Don't make me sit there in the corner. I was at a meeting with my parents when I came back. And what were they telling me about you?"

Eddie, who had taught her the style, launched a counterattack:

"No, Baba Rexhep, it was their own fault! They do not work at all, they are the grains of the lazy. I raised my voice a little, but I didn't want to. For your head, I didn't want to. I'm tired, I can't put it off like this. Why, there are no other global leaders of the globe? If I had known that, I would have remained just a European leader like everyone else..."

Baba Rexhepi softened. There was a weak point in the broom.