Neymar towards the return to the field, Tite confirms: He can play against Korea 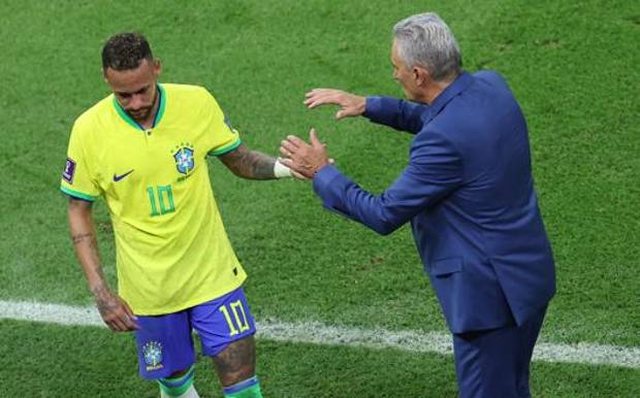 Neymar has recovered. This is the news that all of Brazil was eagerly waiting for. Neymar could be on the pitch against South Korea on Monday night. O'Ney will return after the injury, in the game valid for 1/8 of the World Cup in Qatar.

The confirmation came from Selecao coach Tite at the press conference on the eve. "Yeah," was his dry response when asked if O'Ney could play. Neymar sprained ligaments in his right ankle in Brazil's opener against Serbia. Tite himself immediately showed confidence, declaring that his World Cup was not over. And apparently he was right.

Neymar returned to training with his teammates working with the ball without problem. A clear sign that he had fully recovered from the injury that kept all of Brazil anxious for days. Then the attacker himself posted on social networks the expression "I feel good", confirming that the fear was left behind. O'Ney missed the games against Switzerland and Cameroon.

"As for Neymar - added Tite - he will train tonight with the rest of the group and, since he will do that, I think he will be on the field against South Korea. I don't like to give advances and I like to be reliable. But if Neymar's training means he is good, then he will play. But I'm not going to tell you the other ten in the lineup."

The other good news for Tite is the recovery of Danilo, who will play as a left back. A sacrifice that Juventus will make, given the simultaneous absence of Alex Sandro and Alex Telles. Sandro has not yet fully recovered from the hip problem he suffered against Switzerland and the coach will not risk it.