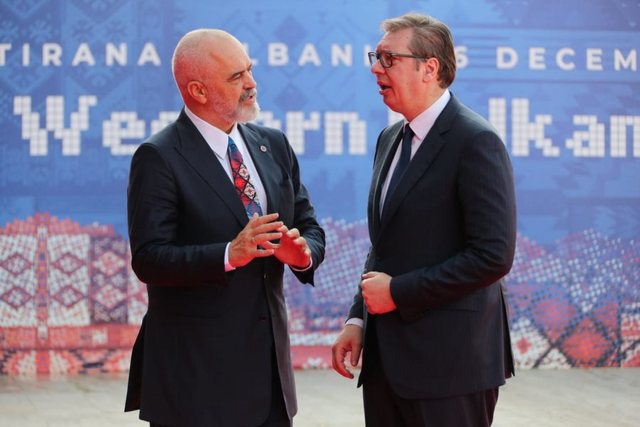 Although he had warned that he would not come to the summit because of tensions with Kosovo, Serbian President Aleksandër Vucic has arrived in Tirana.

In his speech to journalists, Vu?i? said that he decided to come to the summit and present to all European leaders Serbia's position in relation to the Kosovo dialogue.

" There were a number of different issues. Some official reactions to the issue of Kosovo, the dialogue. This was the main reason, but in the end, after the consultations we conducted within the state, we decided to come and discuss all the issues. We remain committed to the process of dialogue and negotiations with EU. We remain committed to the path to the EU, but we have to defend our national interests in accordance with our constitution. I am only a realist, I am here to learn from many people, the EU, the region and finally explain Serbia's position.

There are two such related to the energy issue, the EU wants greater harmonization. This means that it is important to get EU support for energy, roaming. These are good signals. Good signs for all our countries in the Western Balkans. Other than what we will hear, will be the EU strategy for the future. Serbia is an independent country, we know our obligations regarding our journey towards the EU, we know our obligations for harmonization with EU decisions.

We have a different situation regarding the territorial integration of Serbia, which is a century in 99 and 2008. Serbia is very close to Russia. It is an independent country. If it is easy for someone to criticize us and say that we are like Russia.

We have refuted, not with statements with deeds. It is easy to expose all kinds of accusations, falsehoods. The truth comes out and everyone knows the truth. Serbia is an independent country and is on the path of the EU and will remain so ," said Vu?i?.