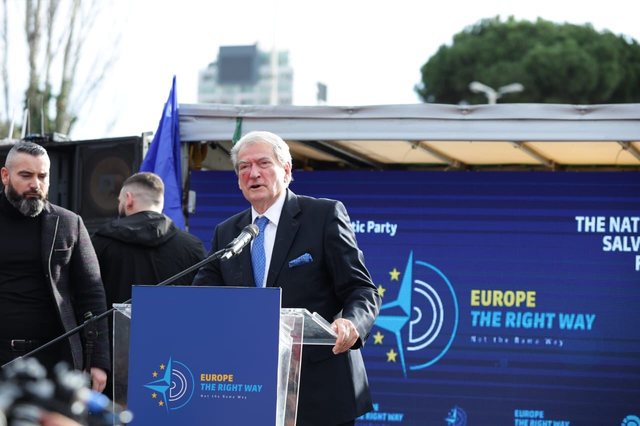 Sali Berisha speaking at the protests after the attack on him

The event on the boulevard where someone deliberately hits in the middle of the people, in the middle of the day, in the presence of cameras, the leader of the opposition and at the same time the chairman of the Democratic Party Mr. Sali Berisha, it was an event as serious as it was unprecedented in history.

I am in no hurry to say by whom it was inspired, paid for, organized. I have about six versions in my mind, but I won't say any because I don't want to throw assumptions out of my mind. But one thing is known: Whatever the striker declares to the police, nothing is believed. His medical record is to punish him with a negligible penalty. Even if it is true, which needs to be looked at closely, it does not change anything! They, ustallars, one of the six versions, therefore, with those people work! History knows this!

But, what impressed me are the quick declarations in the media of a number of main political actors who express themselves in some way against the act, do you say that inside them a sense of useless guilt, makes them rush. Self-blame that psychoanalysis knows so well that those who do not know it would not make statements that are very significant.

Someone says that I condemn violence, because violence has nothing to do with politics! To melt into gas! Are you saying that we don't know that politics and physical violence in the squares certainly have nothing in common in principle, but we also don't know that for politics, they have been beaten up by the police and how many people, at all times!

So violence is not politics and politics is violence! Wow revelation, but no word about the head of the opposition who was hit hard!

Someone else with a pretty sub-position says that he did not know, and that he wished Mr. Berisha, but carefully censors himself so as not to be described as the leader of the opposition.

Someone else condemns the violence, but doesn't even mention that this man was at the head of a welcome protest or meeting for EU leaders and the denunciation of Prime Minister Rama in front of them!

Someone says that violence is unacceptable, but does not mention who violated whom, Mr. Berisha raped that man or that man raped Mr. Berisha!

In all these statements, one thing stands out! Political actors are quick to speak out to wash themselves. And they do well! But washing themselves from a natural, but useless subconscious self-blame, they affirm one thing: Not accepting Mr. Berisha as leader of the opposition leading a protest rally against the government!

By removing him from public expression, you are actually exercising psychological, political, administrative, ethical violence against him in this case. So in a way, and this is where psychoanalysis comes in, you distance yourself from violence by affirming it, in an acceptable, sublimated, displaced form, schizophrenicly, deny what it affirms and affirm what it denies!

And it is precisely this political violence that characterizes our social life that produces physical violence, not only, but the destruction of the country!