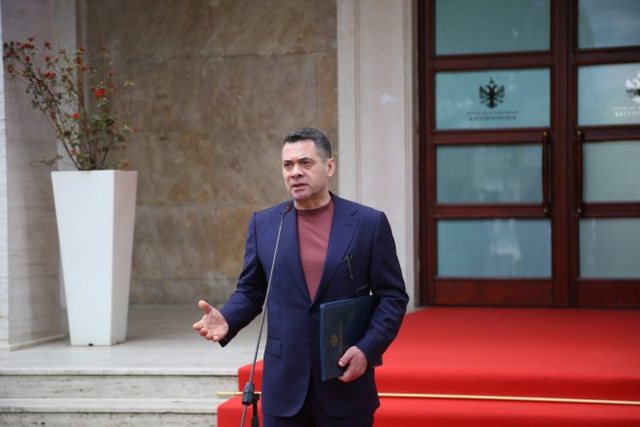 Mr. Arbenaj assuring the journalists that everything will be paid from the State Budget

TIRANA - Only the idea that he will come out to meet the common people dressed as a simple man, will speak in simple words and will pretend as if he has simple troubles, blushes the politician Ahmet Arbenaj with enthusiasm.

It is an adrenaline rush that grips him every time he goes out on the field, every time he hands over the keys of new houses to earthquake-affected families for a picture and then takes them back, because in fact the houses are not finished yet.

"Someone gets a dose of adrenaline and excitement by climbing mountains, or riding a bike on war trails, or going fishing. But there is nothing more invigorating than doing as an ordinary slave, "says Arbenaj for our column, while we are drinking coffee in a neighborhood bar.

And gentle as always, Arbenaj calls the waiter: Brother, how much do these coffees make?

When the boy says 160 lekë, Arbenaj frowns, mutters, "bobo how expensive, he robs us of the lekë", he pays happily and tells us, "when I get the salary we will sit down, we will eat some soufflé. "If I pay for the lights and the water once, then we'll see."

As soon as the waiter leaves, Ahmet Arbenaj returns to his original self and smiles and tells us:

"Do you understand how nice it is? I see myself as an actor. Did you see how I said, ishalla I run out of money for lights and water? "For faith, it is pure adrenaline, listen to me."

Although he is the Deputy Prime Minister and Minister of State for Reconstruction, Ahmet Arbenaj, as he is finishing the reconstruction work, secretly prefers the part of the state. It is also his favorite weapon in the political debate. His historic statement to the cameras, and beyond, to the common people, has not yet been forgotten:

"I assure you that people will not pay a single penny. Everything will be paid from the state budget funds! ”

Even when the government lost several international trials and will have to pay hundreds of millions of euros, Arbenaj declared bluntly: “This government will not take any money out of its pocket. Payments will come from the state budget.

When asked by reporters how it is possible that the government pays money for contracts while the volume of work for which that money was paid was not done at all, the minister was again clear:

"Look, you journalists do not understand finances. "That money comes from the budget, not from us."

We talk a little with Ahmet Arbenaj. Simply dressed, with a pair of sneakers starting to tear, and with sunglasses scratched on one of the windows, he tells us in confidence that he enjoyed the role of fukarai a lot, but now he has to leave. And the simple minister raises his voice for the whole cafe to hear:

"Ika brother, I have to catch the bus. See you when I get my salary, okay? ”

At the turn of the palace a Range Rover appeared out of nowhere, Arbenaj jumped inside like a tiger and the car disappeared.

Note: The Patronageist is a simple satirical column