CULTURE / Butrint agreement provides for disco, strip-tease, as well as hotels in Borsh and Ksamil 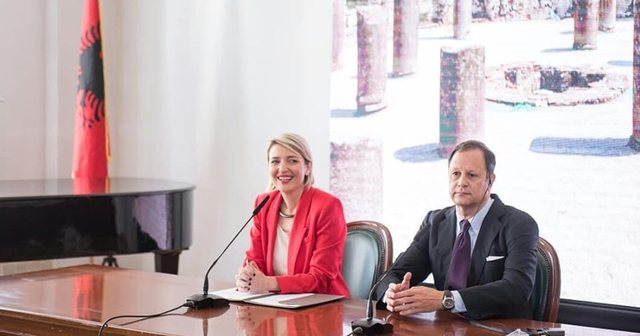 TIRANA - After a vegetation period that had left the most valuable Albanian archaeological asset in misery, the government has decided to give Butrint a concession for 120 years, with the aim of developing to the maximum the finances of those who receive the concession, said yesterday the Minister of Culture Hallva Margarina.

With the profession of home decorator, Minister Margarina admitted yesterday that even because of the craft, for a long time it dripped in her heart that Butrint had remained in a state of misery, with old walls, old castles, old amphitheater, old archeological finds , so in short, a real antiquity.

"Ever since I saw Butrint for the first time, I have thought about how not to find a decorator to combine and complement the facilities of this blessed place with restaurants, hotels, beaches, plastered walls, new curtains, sunbeds to go with the curtains etc etc, ”declared Margarina.

But finally, she said, the time has come for this antiquity abandoned by the previous regime to come to light.

Thus, the Albanian-American Abduction Fund will take over the area of ??Butrint Park and the surrounding areas, which include 20 hectares on Borsh beach and 15 hectares near Ksamil. The Fund also benefits from some 2 million euros that happened to be in the coffers of the Park in question.

For Minister Margarina, this is a normal procedure.

"There is nothing wrong," said Margarina, "for example, I bought a house last year, and it so happened that the house inside had a safe with 300 thousand euros. "It's normal that the money also became mine."

The agreement with the Development Fund envisages that the latter will enrich the Butrint Archaeological Park with discos, local strip-teases, licensed hashish greenhouses, etc. On the other hand, it has been agreed that whatever archeological excavations and finds the Fund makes, it can extract the rags and antiquities it will find abroad, without obtaining permission from the Ministry or Minister Hallva Margarina. Rather, the state has no right to even be present at excavations and finds.

"It is universally known that only the private sector breathes life into valuable assets, including strategic cultural facilities. The state is in vain. "Let there be no state, no laws, this is an idiotic country," declared Hallva Margarina, forgetting for a moment that she was not in opposition, but in power.

Asked how it is possible that she calls Butrint an antiquity, when the value of an archaeological asset lies precisely in its antiquity, Margarina reacted with the dexterity that characterizes it:

"Well, well. "Since you say Butrint is old, I promise we will make it even older than it was!"

Note: The patronage is a satirical column. The Minister of Culture as well