"I'm giving birth to the child, but I don't see him anymore", Shocking confessions of Hamide's sister: He was abused by his whole family 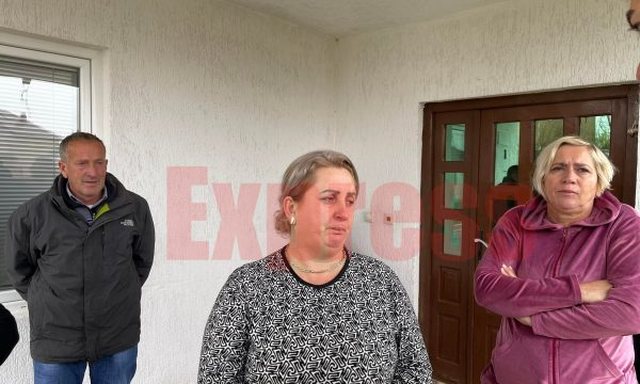 The six sisters of Hamide Magashi, who was killed on Wednesday in front of the Gynecology clinic where she was waiting to give birth to her son, are standing in fear in their parents' house in the village of Llugaxhi in Lipjan because they say that Hamide's ex-husband , Sokol Halili, who is on the run, threatened to throw three bombs at their house. Her sister, Burbuqe Magashi, narrated the difficult life of the deceased to Express Newspaper.

Hamidja had been married for about three months. But life did not offer the 35-year-old a "honeymoon", on the contrary, she changed completely after marriage. The ex-husband allegedly stopped her from her job where she worked for about 15 years and isolated her so much that the deceased had even attempted suicide.

The family is demanding the arrest of Doras and life imprisonment for him.

The 35-year-old woman was due to give birth to her first child today. But, a few hours before she became a mother, she was killed by her ex-husband, who is suspected of having repeatedly mistreated her. The suspect is on the run and the victim's sisters fear that he will kill their little sister as well.

Burbuqe Magashi declares that her sister's ex-husband, who was killed last night, threatened to throw three bombs at their house in Llugaxhi, Lipjan.

"He behaved in the streets, and we were also afraid that he would throw 3 bombs at you and knock him out of the house." "Thojke Shukrina, with my husband, I also drowned my son."

"The ex-husband stopped Hamide Magash from his job"

Burbuqe Magashi confessed that her now-deceased sister Hamidja has always been bruised because her ex-husband has continuously abused her. He even says that he stopped her from work and kept her in isolation.

"My sister worked in the municipality of Ferizaj, when she was married, she left her job for only 1 month and went to fight with those of the municipality and stopped her from working. There is great abuse behind. Her husband got into a fight with the municipal officials and stopped his work.... He came through the yard full of manure, his legs are all covered in sores. By the way, it's all been garbage... The stress that she has after 1 month can't take control of herself, she just stays in silence. But we took it, we talked to her, the sister got better....They told her when she gave birth, to give the baby away. He drowned his sister and daughter-in-law," Burbuqja told Express Newspaper.

Because of the mistreatment, Hamidja tried to drown herself

Burbuqe Magashi confessed that her late sister had tried to jump from the second floor of her ex-husband's house due to violence and mistreatment.

"This forced me to fall from the second floor and drown myself. Since she was mistreated by her whole family, she was isolated, they didn't let her go out in the yard. They told him that until he is 1 and a half years old, he does not need to go to the sisters in Llugaxhi... He started falling from the second floor, because of the mistreatment they gave him because they isolated him. When she went to the bathroom, her mother-in-law followed her, she checked that she didn't have her phone, she wasn't talking to us on the phone," she said.

Hamida's sister, speaking to Express Newspaper, said that the 35-year-old woman was killed when she left the hospital room to buy bread.

"Yesterday morning, he called me and told me, sister, he will go into surgery tomorrow, I told him I was successful. We talked to him, the sister also talked to him at 4:00 p.m., she said I'm fine, don't come tonight but tomorrow. We have told them. When I saw the news, when they released the news that the 35-year-old woman was drowned by her ex-husband. I lost my mind to my sister and I have days that my sister is her. She went to buy something, he kept it and took it. His own mother-in-law, his sister came to the hospital, without the knowledge of the police, they took the child's clothes there. They have no right after all without it. He kept it, this one was inside and a friend went out to buy bread, that friend was the first to walk, this one, that one, he shot her with 4-5 bullets to the head and strangled her with a stun gun." she confesses.

Further, Burbuqja says that Hamidja has been crying constantly that it has been days since she had to hand over the child to her ex-husband.

"My sister Hamide Magashi was strangled by her husband yesterday in the hospital. She has been married for 3 months, there is violence in the family, we went and took all the sisters. They said, oh sister, come on, let's go because he's beating me, he's hitting me in the head with a revolver. They said I made the solution, I called a son of my aunt to make the solution for me. We called him, he gave us the solution, he went and took it and brought it here, they are between the police and the Social Entity, the police are behind all these things. She kept the pregnancy with her father, we have 7 sisters, we have no parents, our aunt is dead. We only have one son of my aunt...He went to the hospital, we went and examined him, yesterday we visited him until four o'clock, he was already crying, he was upset. Thojke gave birth to the child, but I don't see him anymore, I don't hold him in my lap. We used to tell our sisters that you are not the only one, these things happen to everyone.

The 35-year-old was removed by her sisters from her husband's former house, that day the police had found a revolver belonging to him

Burbuqja, Hamide's sister, said that her sister was removed from her husband's house because she was constantly mistreated by him.

"The police took her from her father's house when we stopped her sister because she was mistreated a lot, her husband was in jail for only 24 hours. We are obliged to stop the sister. They went out to the greenhouses in the last case, the sister called the little sister and said come on, let's go because I want to die, we made the solution. We took all the sisters with the son of my father's aunt, we brought him home. That day when the police arrested him, they found his revolver in the car. The sister said that they repeatedly told her to kill me, she said that I have five people to turn Llugaxhi. "The sister said his mother abused her," she said.

Hamide's sister said that at the moment when Hamidja agreed to marry Sokol Halil, "God has lost his mind".

"A friend of hers informed the boy about this. But we saw it at the beginning, but God took the mind of the sister, I don't know how he took that husband".

Hamide Magashi, the woman who was killed
. She asked for life imprisonment for doras.

The murder of the 35-year-old pregnant woman allegedly happened yesterday near the Gynecology clinic in Pristina at around 18:00.

Doras is still on the run, while the same name is known to the law enforcement agencies.

The deceased had a protection order for 6 months, while the suspect had an indictment for threats.

The police ask for help in arresting Sokol Halil./Gazeta express