Exclusive/ Berisha's ex-bodyguard tells where the 'security' went wrong: Even Meta should not have come closer than the others 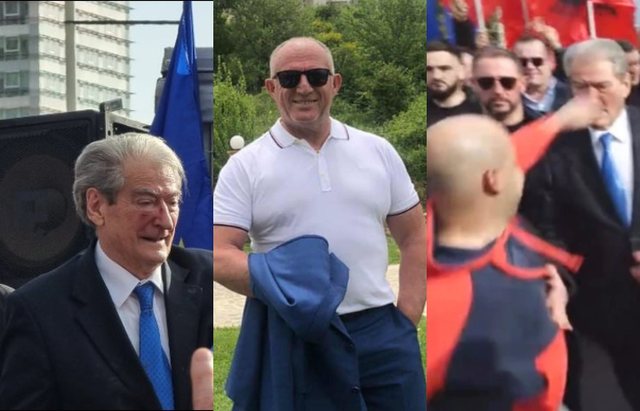 Yesterday, 31-year-old Gerti Shehu attacked the leader of the Democratic Party Sali Berisha, while the latter was marching towards the "Dëshmorët e Kombit" boulevard to participate in the protest.

The 31-year-old punched Berisha in the face, making him bleed. He was immediately detained by Berisha's bodyguards and in the meantime was raped by DP supporters and sympathizers. Sali Berisha's former bodyguard, Osman Levanaku, reacted in an interview to VoxNews where he spoke about how Berisha's bodyguards should have acted to prevent the attack on the former prime minister.

Levenaku : Such a protest should be appreciated to the maximum since it was in front of Europe, you had no opponents from the other side since it was a peaceful protest that was taking place. There is a protocol that must be followed, the bodyguard must never take his attention away from people and guests, he must be vigilant in the person he is guarding, no matter who is by Berisha's side. No one should get closer to him, not even Meta more than he should and not the others. The bodyguard must feel what he does not see and must be more than any other person, doing duty and alertness to the maximum.

Levanaku told VoxNews that before you protect the leader, you should feel him as: a parent, a brother, etc. and that this incident could have been avoided very easily. The former troops claimed that Rama had no interest in Berisha being shot in the eyes of Europe.

Levanaku : You have to love the leader before you protect him to feel like a brother again, it was very avoidable and did not require any great professionalism. His bodyguards showed that they are not professional and they failed, I never thought this would happen to him. I did not think that Berisha could be hunted in the eyes of Europe even though Rama is connected to gangs. The protocol had to be followed, the bodyguards should not see how happy the people were, but their eyes and heart should be on the leader.