Ledi Shamku and Skender Gjinushi, head of the Academy of Sciences

(From the Shopkeepers of Academia)

First of all, I can't help but say that I get an uncontrollable gas from the flood that makes Facebook Akademizma ???? Any news that has to do with Science in the real world, Scientism will spread in its virtual world. He does it so maniacally, that his own virtual world - alias the Facebook wall - looks fixed like that wall of Tirana Variety Shows at the time of Enver where the posters of every show, even of district variety shows, were hung there until the comedians his features shone like Banquo's shadow.

I don't really blame them for this Facebook frenzy. They took it as a style from politics, and there is no way it could be otherwise, considering the essentially partisan nature of the Chief, whose behavior in this case reminds me of the joke of Bamke Qylollari who, right at the door, threw the battering ram on his shoulder, "so that Saliu could see him". It's wrong, who will have to see it, it's not called that and it doesn't even have that kind of eye????.

But no. Let's come to this picture that I have brought here below. 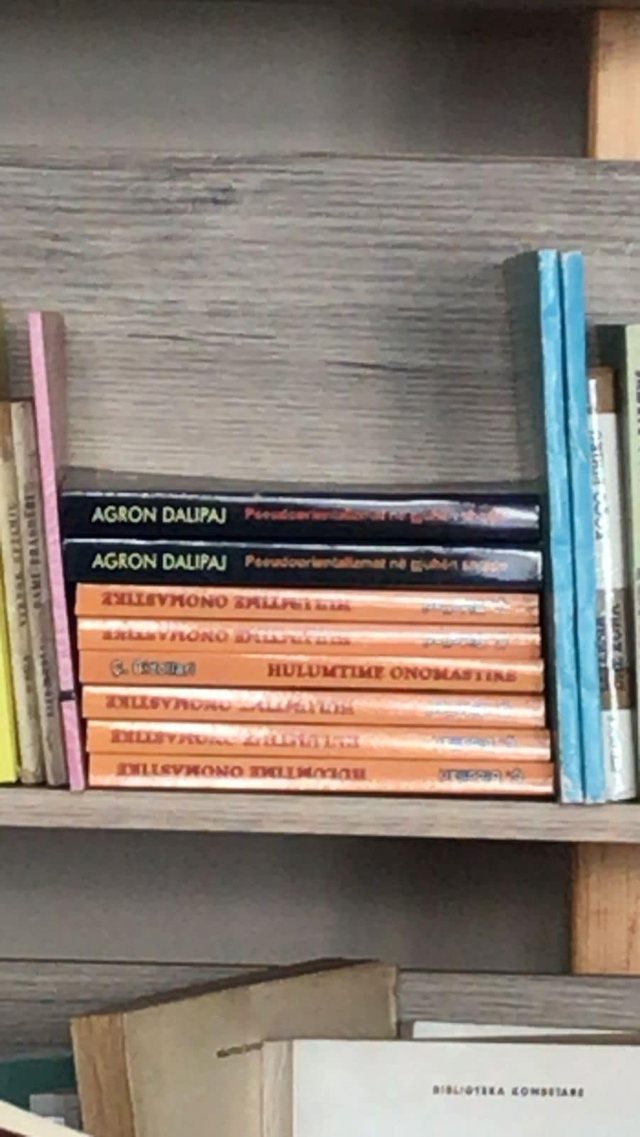 These are the books of a self-proclaimed albanologist, etymologist, -log, and these books are SOLD AT THE ACADEMIC STORE TODAY! Yes, yes, the author who says that Albanian is a cosmic language, that Greek is the daughter of Albanian, that all oriental languages ??should recognize Albanian as god and stick, that every "embryonic" syllable of Albanian explains every word of every other language, this ANTI-ALBANOLOGY AND this NON-SCIENCE IS OFFICIALLY SOLD IN THE STORE OF ACADEMICISM. And so far it is bad work of Scientism, but still not disgusting.

The nausea comes now: I want to remind you readers that this author, ranked like this among the scholars who sacrificed their lives for our Language and Culture, has insulted and insulted publicly with reactions from the most reprehensible leading figures of Albanology. Thus, Çabej has been called "devil of the Albanian language", Kolec has insulted Topalli as "a man made of rubber, without human and scientific dignity", other colleagues of ASA who still continue to pour their might, he has accused them as " traitors sold to the Serbs and Greeks".

First, Albanology as a Humanistic Knowledge, before it has an object and methods, it has Ethics and People first, and it is even the most noble Knowledge (this virtue is not recognized by Scientism, nor does it need it in its stupid calculations!!! ). And THIS ETHICS SHOULD MAKE ACADEMICISM TODAY REDEEM THE BLACK PAGE OF SHAME! And I told you that Chabejn and others are simply hanging on their chests like completely undeserved medals. Well, this bookshelf only says that.

THIS STAGE IN THE SHOP OF ACADEMICISM CLEARLY SHOWS THE RIDICULOUS AND TOTALLY DISRESPECTABLE APPROACH IT HAS TOWARDS ALBANOLOGY.

Keep that etazher, because for two pennies of profit, what do you do, but this way you have to remove Chabey's bust from your yard. You must remove Topalli's portrait from your hauri. And in the dacha, keep it that way! Albanology knows you well. Your problem is that you do not know Albanology at all. Or to put it in one word of our Çabe, Albanology you can't have KÄRCIKUN. It is much much much bigger than you! And it doesn't even make fun of you! He just looks at you with pity.