The real opposition of... the West in Albania 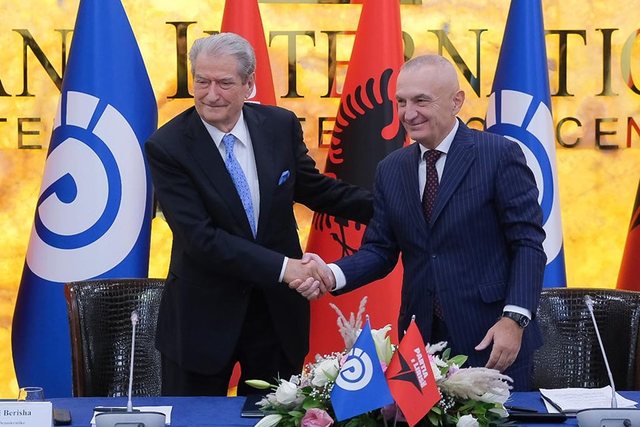 Beyond the noise of the wedding of Berisha, who is marrying for the third time with his first wife, there is a truth that we must all accept. Berisha's marriage with Ilir Meta/Metaj is natural, true and strategic for the situation that Sali Berisha and his partner have in this marriage.

Both together are in a long-term battle, which will physically follow them all their living lives on earth with the West. Sali Berisha and his family, which actually owns that part of the Democratic Party, are eternally condemned as corrupt, undermining democracy and blackmailing the justice system. They are certified by the most authoritative institution of democracy in the world, the US Department of State.

The fact that Berisha's Democratic Party is led by his son, who is also a thief and blackmailer of justice, makes the perspective of that party even more difficult and hopeless. It is simply a criminal family, which has taken the old man of the house to the streets, for its troubles.

Ilir Meta is on that path. Both have jointly embraced an anti-Western course, dictated initially by the need to undermine justice reform, which they saw as a conspiracy against their future. Along the way, they have joined together for more than that.

They have joined together to protect themselves from justice with political immunity, to be factored into the country as destabilizing elements and to blackmail the West for possible connections with the eastern autocrats, if we take into account the famous interviews of Ilir Meta/Metaj or Berisha himself, in relation to the USA.

But their alliance is not electoral. It is not even just electoral. It is an alliance where the union makes them smaller than they are, more powerless than they are on their own, and more tarnished in public opinion. It makes them so, since being two similar problems, they are now only one problem. A problem that must be solved by leaving them out of power in Albania.

But not being a favorable electoral alliance, does not mean that they are not a strong political alliance. Barring any Ilir Meta/Metaj paranoia in the middle of election campaigns, as it usually happens, they are from now on inseparable. Practically, Ilir Meta/Metaj is Berisha's vice-president, and what little LSI is left is simply Berisha's party section.

In a way, their union is a blessing for every new oppositionist, for every opposition factor that wants to be an opposition in Albania and for every deputy or member of the DP that wants to preserve the identity and the reason why the Democratic Party was born. They must join the pro-western opposition of Albania, in a political alliance which must defend the western values ??of our society in the name of the Albanian opposition.

The couple in question have made it easy for them to make any decision to act outside of themselves, to remove any complex that they would not damage the "unity" of the Democrats based on other tricks, with which Berisha has tried to complicate them.

Now they have no illusions.

In opposition, the right marriage has taken place, and the bad has gathered in one place. No matter how big it is, it is small enough to harm Albania and the opposition. It just needs to be isolated and encapsulated like those toxic wastes, so they don't harm anyone. They are the real opposition of the West in Albania and not the real opposition that Albania needs. That truth should challenge them. By not letting them be defeated only by the government, but also by the opposition itself.