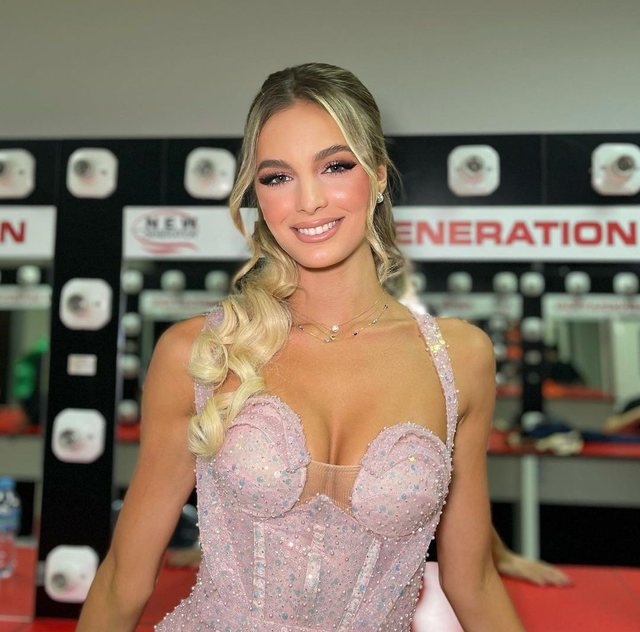 Cindy Marina is one of the sweetest girls on the screen in recent years. She is a successful model for well-known firms, both domestically and abroad, and is already proving herself in sports journalism. The former Miss Albania became part of the dance show "Dance Albania" and on the first night she managed to get the cup of the evening.

Cindy was invited this Tuesday to the show "Rudina" where she told more about this new experience and also talked a little about her much talked about relationship with Genari, the son of the former speaker of the parliament Jozefina Topalli. She confessed that she never thought she would be in a relationship with an Albanian, but Genari made her change her mind.

Rudina Magjistari: You made public in a post on "Instagram" the relationship with Genari. Genar Topallin, who is the son of our former speaker of the parliament. Tell me a little bit about this relationship, what can you say about this stage you are at?

Cindy Marina: When this moment of connection comes I always think a little more. I'm a bit more private with my relationship because I want to keep it to myself, because I feel like every other aspect of life people know everything. Our relationship is going very well, Genari is a wonderful guy, I am very lucky to have him in my arms, because he supports me in every aspect, in every direction I want to take, he is the first to tell me why not. It is always supportive.

Rudina Magjistari: Even as a couple you are very charming, both beautiful. You seem to combine a lot. Maybe the fact that you are both from Shkodra, originally from there, is also a reason to go better as a couple with each other, right?

Cindy Marina: Why not. In fact, I never thought that I could connect with an Albanian boy. Not for any reason, but since I grew up there, I didn't have much company with people from Albania, but when I met Genar... I don't know, he was special to me and I found him.

Cindy Marina for Jozefina Topalli: I am lucky to know her

Harassed by Rudina, Cindy also spoke about her relationship with the former speaker of the parliament, Topalli. She confesses that she knew Jozefina before she had a relationship with Genari, as they had early family acquaintances. Although she still doesn't call him mother-in-law, Cindy says that she has a very good relationship with her partner's mother and even feels lucky to have known her.

Cindy Marina: Absolutely. I actually met him long before I met Genar. We have known each other as a family before, so when I got in touch with Gennar I didn't have any embarrassment to meet him. She is a wonderful person. I am truly lucky to know him.

Rudina Magjistari: I wish that things go well and beautifully and that you make important decisions with each other. But he would be a great father-in-law. A very beautiful mother-in-law, madam.

Rudina Magjistari: You would be very lucky or not if you thought about it in this direction. Would she perhaps be a friend for you? What do you think?

Cindy Marina: I'm still very young. I didn't think about these kinds of things, but like I said, she's great, I don't think I can change man. She has always remained the same, as she is, smiling and very loving.