The Greek Ministry for Migration and Asylum said through a report on legal foreigners in Greece that Albanian citizens constitute the largest number of foreigners in the country.

According to the report that refers to data from August of this year, 291,868 Albanian immigrants have a valid residence permit in Greece and make up 61.4% of regular foreigners.

This number also includes about 13,329 Albanian citizens who have been provided with the special identification card "as homogeneous", members of the Greek minority from Albania, who have been living in Greece for years. They make up 67% of foreigners who have been granted this status.

According to the Greek Ministry for Migration and Asylum, in the same period of a year ago, the number of Albanians with valid residence permits was significantly higher. 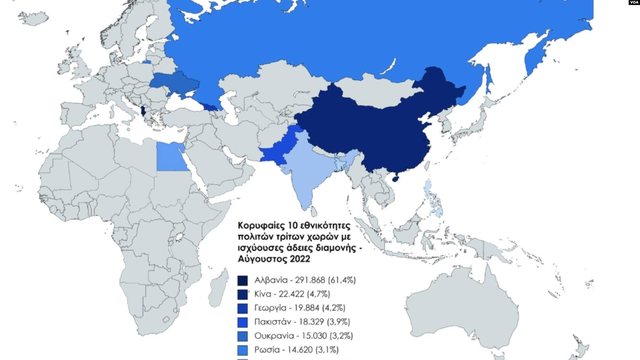 In August 2021, according to the Greek Ministry of Immigration and Asylum, 422,954 immigrants from Albania had a valid residence permit and constituted 63.07% of regular foreigners in Greece.

The decrease in the number of regular Albanian immigrants in Greece after one year is related not only to the procedures for issuing residence permits, but also to a dynamic movement of Albanians who work and live in Greece to other European countries.

Many Albanians who lived for years in Greece have recently emigrated to the countries of northern Europe and to Britain after difficulties in Greece with employment and rising prices./VOA