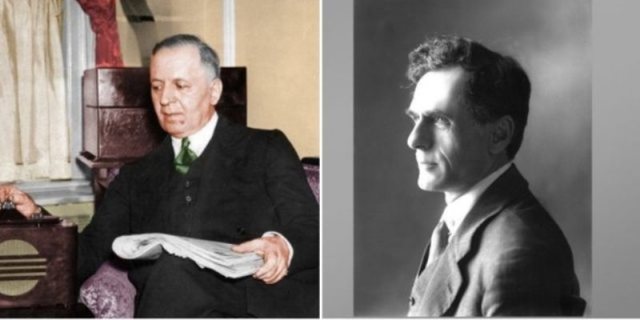 Who better than Faik Konica and Mit'hat Frashëri can paraphrase the Albanians? The two aristocrats of Albanian thought, not only appreciated their compatriots, but not having any complexes, pointed out with a subtle irony, but quite sharp our character.

1- The misery of Albanians has always been attached to individuals and not to ideas... The history of Albania is full of such similar evidence. Let's try with all our strength to heal Albanians from love for individuals. They must learn to love Albania - not to please this or that Albanian.

2- The desire for revenge is the most powerful spring of the Albanian soul.

3- A Latin saying of the Middle Ages, slightly changed: Homo homini lupus - Man to man is a wolf. Femina feminae lupior – Woman to woman is more wolfish. Albanus Albano lupissimus – The Albanian for the Albanian is quite a wolf (wolf gone wolf).

4- The Albanian has a habit of objecting before understanding.

5- Albania is a blessed country with a thousand beauties, trampled by the crowd which harbors a certain hatred towards beauty. - Faik Konica

6- If Albania - fatal word - dies, when can we, without slander, write these words on its tombstone: It was raised by idealists, saved by chance, killed by politicians...

7- The nation (Illyrian-Albanian) of Diocletian, of the philosopher Julian, of Justinian, is a nation that had its own citizens when the ancestors of the French and the English wore buffalo skins and lived in caves.

8- Albanians are tolerant of other faiths and perhaps, this is the only country in Europe where there have been no religious wars.

11-The Albanian, no matter how shy he is, quickly gets to work as soon as he sees that his work will not be wasted. Perhaps you have heard that the Corinth Canal in Greece, which joined two seas, was more crowded by Albanian workers. They worked, those healthy boys of Albania, they worked.... A nation that is lazy from the root is a dead nation.

12-Albanians are very independent and very individualistic, they are not subject to the influence of anyone against their will.

13- An undoubtedly unfortunate feature of Albanians and a very visible feature is the complete lack of idealism. In a country where people die so easily for nothing, it is unheard of to die for an ideal or a cause.

14- Seeing and listening, the world learns and is built. We Albanians cannot take lessons; the mountains shake and roll, we do not change our ways. Keep what I'm telling you: in a hundred years, regardless of how we're doing, we'll be as low as we are today.

15- The poor Albanians are waiting for Europe to come today or tomorrow to save them. It is necessary to say, to shout the truth: Europe has the Albanians as savages and to be lost... So let's say the truth, always the truth,... let's try to breathe a little life and a little courage into our people.

16- A characteristic feature of Albanians is the love for money; they are always ready to enter into the most dangerous adventures, if they see a profit. In the times of the old Turkish Empire, the Turks told a story: "They asked the Albanian: will you go to hell?" He answered: "How much do they pay there?".

1- The Albanian by nature is vain, full of vanity and selfishness. He never likes to see and recognize his own fault and fault: he always likes to blame another.

2- Albanians, although mostly Muslims, have never considered themselves Turks. On the contrary, they had a clear notion of their own individuality, and a deep gulf prevented them from mixing with the race of the conquerors.

4- The Albanian was ruined by disobedience and not by obedience. First, set an example of non-blind obedience.

5- Get rid of yourself as a little wise and a little knowledgeable. Arrogance has driven us crazy to this day.

6- We must have the courage to tell the truth, we say white to white and black to black.

7- Do not rebuke and curse the Albanian for the fault he has committed, because that is the strongest way to make him persist in that fault. Take it well and try to convince him, without even having the appearance of giving advice.

8- The Albanian, not being used to political life, I mean, not having a state, government and independence until today, has not yet understood the burden, duties and responsibilities that come from an independent life.

9- Patricularism, localism and exclusivism among Albanians are revealed with the mania that everyone has to take the name of the village or the city as a family name. When two Albanians mature, after the first joy, the essential question is: where do we get sir?

10 - Many times the ideal for an Albanian is to be good, by any means. Of course, having a narrow horizon, he can only look for easy successes.

12- The salvation of Albania will come through ourselves.

13- The Albanian escapes from the Motherland easily, not that he emigrates, but he goes to seek his fortune elsewhere and it is perhaps this exodus that prevents his homeland from being cultivated better.