The tragedy of Himara, the protesters paint the Ministry of the Interior with red paint: It is Jonada's blood 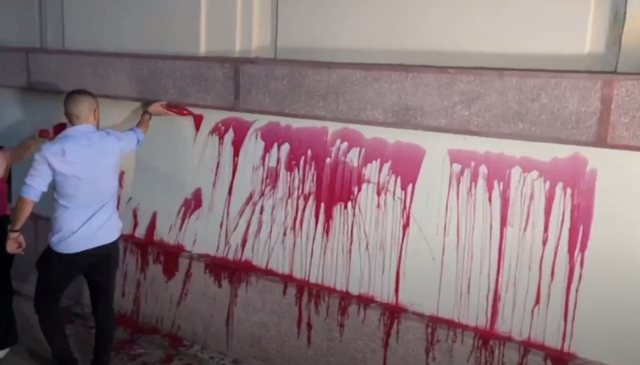 Paint in the ministry building

This Monday, the second day of the protest is taking place for the tragic death of 7-year-old Jonada Avdia, who was killed by the boat led by Commissioner Arjan Tase on the beach of Potami in Himara.

The protest is organized by opposition parties and civil society demanding the resignation of two ministers, Bledi Çuçi and Mirela Kumbaro.

In today's protest, the protesters have painted the walls of the Ministry of Interior building with red paint, which, according to them, symbolizes the blood caused by Prime Minister Edi Rama as well as ministers Bledi Çuçi and Mirela Kumbaro.

"Today, here with us, we are seeing some protesters who are not leaving anything unsaid to insult this government. Can we blame them, when the government does not take any responsibility. How can we not insult them from the family. We are paying with blood for the crimes of this state, the thefts that are being done to us every day, oppression and arrogance. Today, Albanian parents are afraid to cross the streets. How many of you have the courage to let small children play in the neighborhood? All of our lives are being destroyed if we don't act. Whose turn is it, me or someone else, some other child. Our children are killing us, we apologize to journalists, sisters for using a certain vocabulary. This is the blood of Jonada, the blood caused by Edi Rama, minister Kumbaro" - said a citizen.