Profile/ Who is Kostelanick, the diplomat who could be the US am...

Youth is gone, at least...we have the day

Yuri Kim's term ends, here is who is expected to be the new Amer...

NAMES/ Who were the 343 signatories of the establishment of the ...

Ahmetaj's travels are revealed/ From Milan, Vienna to Bucharest, how they were paid with Zoto's bank card

The devaluation of the Euro reaches a new historical record, falling below 116 ALL for the first time

Santos puts an end to rumors and defends Ronaldo: It has become fashionable to attack only Cristiano

Serious in Tirana/ Passers-by find a person hanging, what is suspected

LATEST NEWS/ Bomb alert near the Border Directorate in Tirana

Was he told why he hit Berisha? Gert Shehu's lawyer speaks

Rama: Without Erdogan, the walls of Europe would not stand

German newspaper: Albania, problems with corruption, justice and freedom of the press 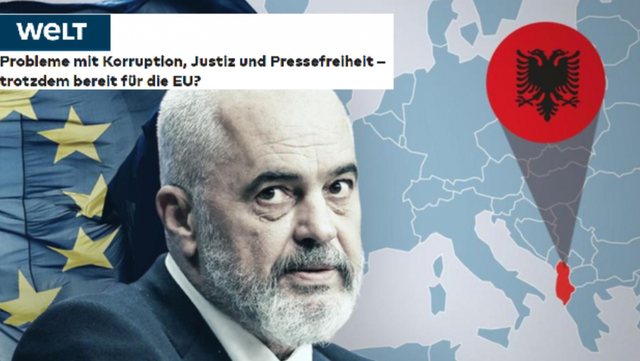 One of the biggest newspapers in Germany,  Die Welt , has published a long article about Albania. It is emphasized there that the country has deep problems with corruption, justice and freedom of the press. The article opens with a question about whether Albania is ready for the EU despite all these problems. The negotiations are said to have opened up more because of the geostrategic situation created by the war in Ukraine.

"The war in Ukraine at the doors of Europe has given the Western alliances a moment of rebirth. There is a consensus that the West must come closer to confronting the Russian aggressor, Vladimir Putin. Not least because of this, Ukraine and Moldova received the status of candidates for EU membership in June. The Western Balkans are also strategically important for the EU, as they form the land bridge between NATO's southeastern flank and Central Europe. However, it is becoming clear that, regardless of the current moment, there are still a number of challenges standing in the way of EU enlargement in the Western Balkans. This is visible in Albania", says the article.

Corruption, justice and press freedom issues – is it ready for the EU?

The heads of the governments of Albania and North Macedonia grabbed Ursula von der Leyen's hand, squeezing it tightly. Almost as if they were afraid that the president of the European Commission might change her mind and break away from the handshake. And so also from a promise that the European Union had previously made to the statesmen Edi Rama and Dimitar Kovacevski.

The photos of unity were coming to Brussels at the right time. Because the war in Ukraine at the doors of Europe has given the Western alliances a moment of rebirth. There is a consensus that the West must come closer to confronting the Russian aggressor, Vladimir Putin. Not least because of this, Ukraine and Moldova received the status of candidates for EU membership in June.

The Western Balkans are also strategically important for the EU, as they form the land bridge between NATO's southeastern flank and Central Europe. However, it is becoming clear that, regardless of the current moment, there are still a number of challenges standing in the way of EU enlargement in the Western Balkans. This is evident in Albania.

Albania celebrated the historic moment after almost three decades. In 2003, Tirana submitted its application for membership. In the days after the announcement, a huge EU flag decorated the government building in 'Skënderbej' square in Tirana.

Affinity with the EU is very high in the country with 2.8 million inhabitants. According to the Balkan Public Barometer, 89% of Albanians evaluate EU membership as positive. In conversations with locals, the proximity to the EU is certain. European shops cover the cityscape in Tirana, and the euro is, at least unofficially, the second national currency.

Tirana's relationship with the EU is close. For years, the country, which was freed from communism in 1991 and dedicated to Western and democratic values, has tried to align itself with Brussels on foreign policy.

In the Ukraine war, Tirana unconditionally supported EU sanctions against Russia. In contrast to other countries of the Western Balkans, Tirana is holding back on investments from China, with which Beijing seeks to strengthen its influence in the region.

In recent years, a reform in justice and the introduction of the so-called Special Structure against Corruption – SPAK as a special independent prosecutor, has advanced efforts in the fight against organized crime and drug trafficking.

"We have made extraordinary progress in the field of the rule of law and in the fight against corruption," said Christiane Hohmann, the ambassador of the EU delegation in Albania. She welcomes us to her office with a panoramic view of the capital for an interview. "But our work is far from over, there is still a gigantic task ahead."

In fact, corruption is a wound in Albania, which is very difficult to heal. The country ranks 110th out of 180 in Transparency International's Corruption Perceptions Index. Aranita Brahaj, head of the Albanian Institute of Science/Open Data Albania, knows how serious the problem is.

"Corruption is an extraordinary problem in Albania" - says the data analysis expert with a focus on transparency, control and anti-corruption. "It is not only present in the high ranks, but also in the daily life of every citizen. Whether visiting the doctor or choosing a primary school".

Albania is not able to exercise judicial, constitutional and parliamentary control over the government, says Brahaj. So, de facto, Prime Minister Rama has a free hand.

The list of scandals surrounding Rama confirms this statement. The head of the Socialist Party, who once campaigned for the fight against corruption, is accused of ties to the mafia.

Scandals are also multiplying in his orbit of power. Recently, SP politician Alqi Blako was arrested at the end of April after he is said to be involved in a corruption scandal of 430 million euros. The opposition accuses Rama of being the organizer of criminal activities.

In fact, the government has made efforts to control corruption in the country. In 2016, at the instigation of the EU, it adopted a judicial reform that included an intensive review of all judges and prosecutors in terms of professional competence, wealth and integrity.

According to the data of the "Report on Albania 2021", of the EU Commission, 62% of review procedures have ended with dismissal or dismissal. The reform was welcomed in Brussels and EU ambassador Hohman also called the vetting procedure a 'successful measure', which has never been seen before in the region.

But corruption expert Brahaj disagrees. The controls were 'well-intentioned but poorly planned'. The Supreme Court and the Constitutional Court were not fully staffed for years and were de facto unable to act. A flawed judiciary has allowed the government to pass 'corrupt laws'.

Way behind when it comes to freedom of the press

An area that Brussels is scrutinizing closely for the progress of the EU membership process, and which worries the EU ambassador, Hohmann, is the freedom of the press in the country: "The understanding of the press as a corrective needs development in Albania". The country is ranked by Reporters Without Borders 103 out of 180 countries.

The broadcast media is largely in the hands of a few wealthy entrepreneurs with political connections. Prime Minister Rama caused a stir recently after he threatened journalists with 're-education' after critical questions and excluded them from press conferences. "We expect all politicians to treat journalists with respect," says Hohmann.

The candidate country still has a lot to do before Albania joins the European alliance. For Sokol Dedjan, the head of political affairs in the Ministry of Foreign Affairs, efforts are not only required from Tirana. "In view of the war in Europe and the granting of candidate status to Ukraine and Moldova, the EU must now show more credibility than the promises made to the candidate countries that EU enlargement is a serious process."

In other words, the EU must prove to Russia that the unity of European countries goes beyond terminology, even as a sign of restraint. According to him, the countries of the Western Balkans have priority to join the alliance because they are "more advanced in preparation".

On the other hand, EU ambassador Hohmann emphasizes that the war in Ukraine does not result in the automatic enlargement of the EU. "Each country will continue to be considered individually. The geostrategic argument should not hide the fact that the countries must of course also meet their requirements to enter the EU". According to Hohmann, Tirana must now prove that the trust of the member countries is justified. "Albania is now facing a marathon"

She was making a live video in the car, this is the 50-year-old who lost her ...

The sexy moderator of sports shows accepts the invitation, will enter "BB VIP...

Shocking footage, the moment when the power cable falls on the railway worker...

Google data, which Albanian cities have searched for the word "p*rno" the mos...

They are never clear, get to know the most enigmatic signs of the horoscope